I was happily munching through today’s lunch of crabsticks, tomato, beetroot and M&S Wheatberries and Giant Couscous salad – when I suddenly realised that I don’t actually know what wheatberries are.

I can tell you that they look kind of like pinenuts and have a similar texture to pearl barley – but other than that not a clue….are they a fruit, a grain, a soggy nut?  They sure don’t look like a berry.

Whatever they are they seem to be appearing in lots of things at the moment so I decided to investigate. 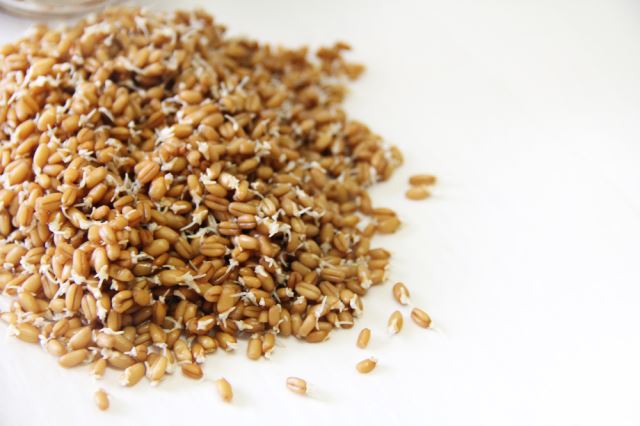 Wheatberries are actually the kernels that grow on sheaves of wheat.

Normally, these are ground to make wholewheat flour, but this just sees them removed, dehulled – and, in salads like the one I was tucking into, cooking until they go soft.

They’re incredibly filling, nicely chewy and have a bit of a nutty taste.

Yes, very much so – because they are almost completely intact (only the outer husk is removed) they class as a whole grain and are packed with fiber, protein and nutrients.

You’ll get B vitamins, iron, zinc, calcium, copper and more from a serving of wheatberries. Wholegrains are also good sources of antioxidants.

Because they’re not refined in any way, they have a low GI and will convert slowly to sugar in the body.

The result of this is that they probably one of the healthiest grains you can eat.

How Many Calories are in Wheatberries?

What Can You Do With Them?

I’ve mostly seen them used in salads (thanks M&S) where they make a great replacement for pine nuts – but you can also use them instead of rice or other grains as a side dish. 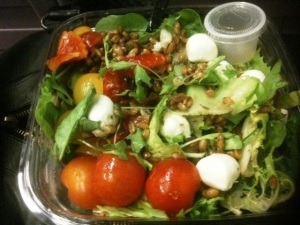 They also work well added to soups and stews and even make porridge out of them.

If you’re looking for wheatberry recipes, you’ll find some good ones on the Merchant Gourmet site.

How Do You Cook Them?

Slowly! To prepare fresh wheat berries means boiling them for about an hour until they soften.

The good news is that you can buy them partly cooked by my favourite convenient carb provider Merchant Gourmet.

If you do cook them up yourself though they freeze so you could always just do a huge batch in one go.

The clue is in the title – wheatberries contain wheat so, if you’re avoiding wheat or gluten, they are therefore are not the nutty flavoured choice for you. 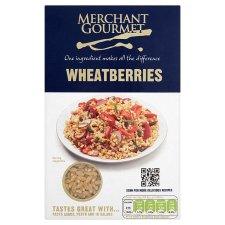 Just as with the flat peaches I found a few weeks back, it amazes me that I still find foods out there I haven’t tried yet. And natural ones as well.  What have you tried lately that you’d never had before?

If you’re looking for ideas. you might find some ideas in our ‘what the heck is….’ section here.