I still find it amazing, that I am in my forties, have lived in three different countries and have travelled a lot – yet, I can still walk into a supermarket or a restaurant and find something that I have never eaten before.

Sometimes this is because things suddenly get trendy (samphire); sometimes it’s because I let go of preconceptions and consume something I thought I wouldn’t like beef hearts, other times it’s simply because I see something that looks like scientists have done something bonkers in a greenhouse – and this is what happened last night when I encountered a Flat Peach and Flat Nectarine in my local Tesco.

I spotted them because, in their packaging flat peaches aka Saturn Peaches look like doughnuts – in fact in the US they are known as the Donut Peach – and I couldn’t work out why there was a pack of doughnuts next to the apricots.

I then spotted the words ‘Flat Peach’  and next to them the ‘Flat Nectarine’. This alone was too good for me to resist (I’d already got excited the aisle down by the purple dragonfruit, but it was £2.00 for one so The Boyfriend told me to put it back!) but then I read the packaging… ‘Specially selected for the perfect bite….all the delicious sweet taste of an ordinary peach without the mess.’ Upon reading this my little heart sang with joy.

I like fruit, but I don’t like messy fruit – The Boyfriend has to peel my oranges for me or I refuse to eat them and I don’t ever bite into fruit like apples, pears, peaches and nectarines.

Instead, I eat them by cutting them into little pieces.

As such much of my fruit consumption is of the berry variety – bite-sized, non-messy fruit, therefore, seemed like a dream come true – and an exciting afternoon snack choice.

Now if you’re like me at this point, you have questions… starting with..

How Do You Make a Flat Peach?

I thought it was going to be grown in special moulds like Mickey Mouse cucumbers or Square Watermelons, but apparently not.

Instead,  it seems a variety of flat peaches called Pan Tao, grow naturally in China, and the versions in our supermarkets are descendants of these.

Whether they have the same powers though, is debatable as Chinese mythology says that the first Pan Tao was a fruit of longevity that took 3000 years just to ripen – at which point MUCH excitement occurred.

The nectarines have been cultivated by crossing a normal nectarine with a donut peach to create a hybrid.

Yes, they are in fact, it’s quite bizarre as they literally do fit perfectly into your mouth so there’s no drippy juice down your chin. If they could just make the stones edible as well they’d be perfect.

Saying that though, I shouldn’t diss the stones too much as they are actually attached slightly differently from those in a normal peach and as such, they pretty much just pop out when you try to remove them – another reason why they are less messy than the normal fruit.

How Many Calories in a Flat Peach?

Because they’re slightly smaller than a round peach, they also have a few fewer calories stacking up at about 45 calories a fruit.

Any Other Differences Between a Flat Peach and a Round One?

Well yes, they are slightly sweeter than a traditional peach and they also have a slightly less fuzzy skin.

Flattened peaches also have whiter flesh rather than the bright orange that you’re used to seeing in a normal peach.

The downside is that they are a bit harder to grow than normal peaches and so you might find flat peaches cost a little bit more than you’re used to.

As I said, I bought my donut peach in Tesco, but you can find them in most of the supermarkets. Their peak season is June to September and most of the stock in the UK comes from Spain.

What Else Can You Do With a Donut Peach?

One thing they are particularly good for though – as they have less juice – is using in savoury dishes like salads. Try them with prawns, chicken or a crisp blue cheese.

They also make a good addition to a cheese plate. 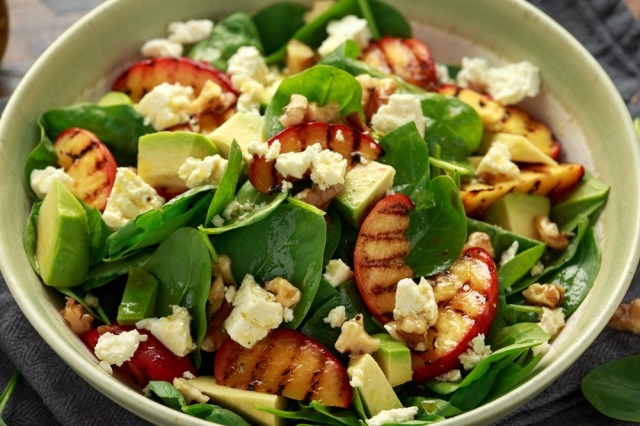 Half an avocado, diced

2 thoughts on “Looks Odd, Tastes Delicious But What is a Flat Peach?”