(ad-gifted*) Imagine, if you will the following. Helen, your esteemed Wellness Nerd with a spoon in her mouth making noises along the lines of …”Mmmnfh…..gggjldhio…mnppph…..OMG……mmmdphiha…ggrglgg.’ 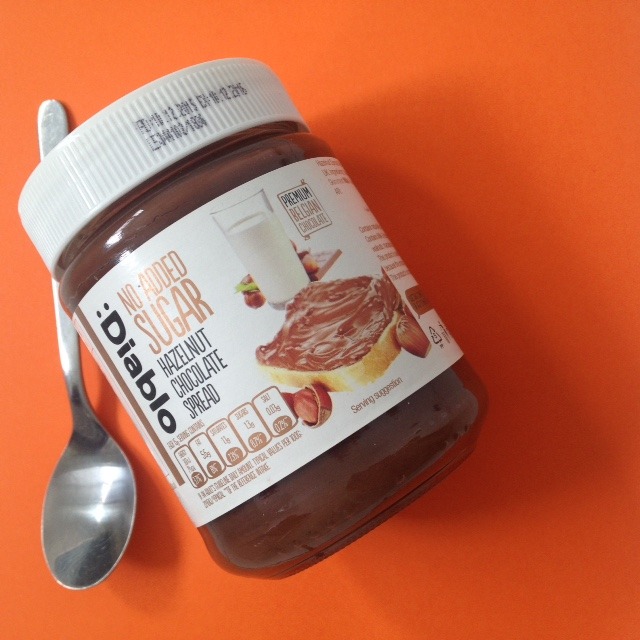 The Wellness Nerd contains affiliate links. If you make a purchase from one of these links I earn a small commission at no cost to you. As an Amazon Associate, I earn from qualifying purchases

That was the scene at TWN Towers earlier today when I finally decided to break into the jar of No Added Sugar Hazelnut Chocolate Spread I was recently sent by healthy choccy company Diablo.

I’d already munched my way through the chocolate bars they’d sent me but this was the big one – a no-sugar version of Nutella.

When other people steal bread rolls, cheese or little jars of jam from hotel breakfast buffets, I have been known to pilfer those tiny little plastic packets of Nutella.

As far as I’m concerned this isn’t technically stealing, it’s just delayed consumption because you see, I won’t eat the said yummy chocolate spread at breakfast as I don’t like it on toast or bagels or crumpets or, any fact anything doughy, instead, I eat it with a spoon directly out of the packet – and that’s something only to be done between meals.

Which is why, despite the fact that it’s been in my house for about three weeks I’ve avoided opening this particular jar – once it’s open if it’s as good as the chocolate, I know there’s no going back.

And yep, as you can tell by the typed representations of the limited muffled exclamations of glee that you can make with a spoon in your mouth above, it’s good.

One thing that’s notable about the Diablo no-added sugar spread is that it’s quite sweet. That and a notice on the side warning against excessive consumption for erm, laxative reasons (well that’s one way to help keep me from gorging on the whole thing!) gives away the fact that although they don’t add sugar, they do use a sweetener.

In this case malitol, a sugar alcohol that’s about 3/4 as sweet as sugar – it also contains roughly half the calories of sugar and has a slightly lower GI.

So, what does this mean in terms of the calories in Diablo?

Diablo contains 74 calories a 15g spoonful – and considering it’s goey, hazlenutty and very moreish that means its’ probably going to cause me to go up a dress size if I don’t lock it somewhere I can’t get to it immediately after this post is written.

Personally, I’m a huge fan of the hazelnut spread of joy….just as I was of the chocolate bars they sent to accompany the jar so it didn’t get lonely in the post.

Between The Boyfriend and I, we happily tested on your behalf….

The Sugar-Free Dark Chocolate with Hazelnuts – 10/10

You can thank us for that later. The only downside of all of them was the words ‘no added sugar’ and the fact that you’re only consuming 71 calories per 3 squares – or 69 per 2 small wafers – in my head says ‘oh go on, eat another serving’.

Where to Order Diablo Hazlenut Spread

You can buy the spreads online at amazon – they’ve also added a White Chocolate and Hazlenut spread version since I wrote this post.

If you’re also looking for a lower-calorie alternative to peanut butter, you might want to have a look at this post on powdered peanut butter.

Disclosure: What does ad – gifted mean? In the last few years, long after I originally wrote this post, the laws have changed for bloggers who receive products and, we have to label certain posts as ads.

Where this happens on this blog, I’ve decided to clearly explain the relationship between me and the company at the time the post was written.

In the case of posts marked ad-gifted, the product was sent on spec, usually because of my day job as a journalist. No money changed hands, no deal was made to run a review of them here or in any other publication and the company had no say in what was said when I decided to do so. Whatever I have said is totally independent.