It’s two days before Xmas and I’m in the middle of a hotel lobby in full gym kit doing tricep dips and push-ups. But this is not the reception of a health spa or boot camp where people are expecting such activities – it’s the middle of the Aria hotel in Las Vegas – a city more known for day-long drinking and general excess than fitness…..no wonder people are looking at me slightly strangely. 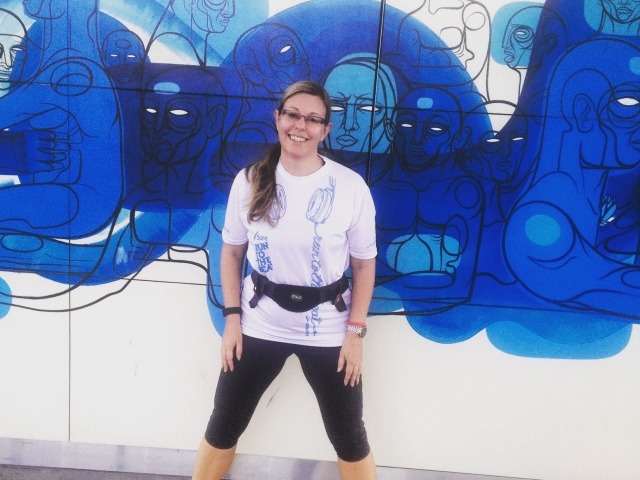 There was however method in my madness – I was going to be on holiday in the US for three weeks. As regular readers will know, my love of the burrito is great and the effects of this upon my waistline are greater – I was determined this time to not do too much damage and so, I had been exploring ‘active’ things to do in Las Vegas.

My hotel (the Vdara) had a nice gym but the thing that really intrigued me was a service offered at their sister hotel Aria called the Indoor Hike.

What Is the Aria Indoor Hike?

Its premise was simple it was a walk-come-toning session with a personal trainer using the hotel as your workout playground.

It cost $50 – but as a special offer at the time, if you booked a fitness or beauty treatment for at least that amount you got free access to the Aria spa.

This had some things I definitely wanted to try – notably, some stone beds that you lie on called Gabanyoku beds –  and so I emailed the hotel concierge and booked myself in. (If you want to see more about the Aria Spa itself, check out this post here) 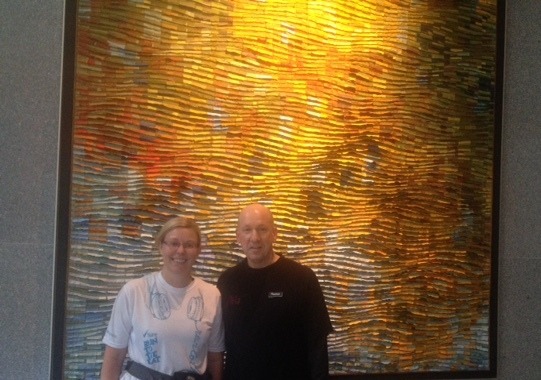 My session was booked for 9am and I had to turn up at the Aria gym to meet my trainer Steve Rosen aka Rocket.

He handed me a yoga mat (there’s no yoga, it’s to stop you having to do sit-ups on the carpet) and off we went.

The walk is about 2 miles long (4400 steps according to my FitBit) and takes an hour – it goes around the Aria hotel, through the casino, around the bars and restaurants, up to the monorail, through the shops and past the myriad of artworks that the hotel has in its public areas – as such you also get a ‘learn stuff about the artworks’ tour too which was really interesting.

In between walking, you’ll climb flight after flight of stairs, do press-ups in the lobby, tricep dips in the valet parking line, sit-ups on the floor by the convention centre and generally have a really good workout which feels like fun.

Rocket is a great guide – easy to talk to and he’ll tailor the workout to your fitness level and needs.

If you tell him you want a hard workout expect to find yourself running up the flight of ‘never-ending’ stairs at Aria convention centre – and doing it twice! I just wanted to move and so we kept things pretty easy for me.

He’ll also point out where you can buy healthy foody stuff around the Aria resort – Aria is one of the MGM resorts which offers the 700 calorie Smart Plate program for example and there’s also some healthy pancake options lurking around a corner. It also has a juice cleanse store on the 2nd level should you not realise why you are in Vegas.

I loved the walk and really loved how much I learned about the art around the resort and the Crystals shopping centre.

You don’t think that a glowy Xmas tree shaped thingy outside the Dolce and Gabbana store in a shopping mall is going to be the only piece from a renowned Japanese artist outside of Japan – or, that an ice sculpture in that same shopping mall is never the same two days running because the columns are reshaped daily by the in-house artist – and that to do this they actually lower them underground.

If you’re off to Vegas and want a fun fitness experience definitely book in. Here’s where to find out more…..but it’s not the only healthy thing to do in Vegas. 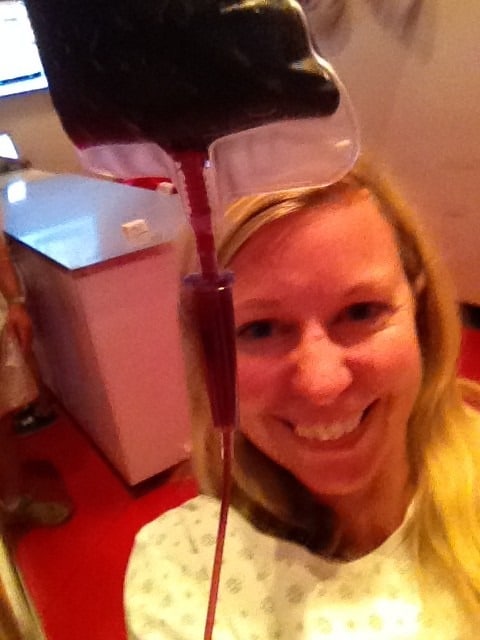 Five More ‘Healthy’ Things To Do in Vegas

Check out Juice Farm in the Palazzo Hotel: I’m not a massive juice fan but liked the sound of their tailored hangover remedy.

So, after a slightly heavy night, I wandered up The Strip for a turmeric shot and an ‘Activated Charcoal Lemonade’

The shot was as nasty as turmeric shots normally are, but felt like it did me some good – the Hangover Lemonade was a bit too acidic for the morning after (and my throat) but pretty tasty.

Juice Farm also now have a branch in The Venetian

Walk Red Rock Canyon. This is about 20 minutes drive outside Vegas and is absolutely stunning.

There’s lots of walking or running trails around the park but, if you’re a bit wary of heading out into the desert, there were also lots of people walking the 13-mile paved loop. This is shared with cars but speed limits are limited and it’s one way driving only.

Run The Strip: The Las Vegas strip is one of the few places I’ve felt safe to run outdoors in the US.

There’s an actual real pavement – and because there are bridges to get you across the roads you’re not being stopped by traffic lights every 10 feet.

It’s best to do early in the morning though – before say 10am latest – after that, you’ll be dodging the sightseers and it won’t be fun.

Do your own indoor hike: The evening after my outing with Rocket my legs were killing me. I couldn’t work out why I’d only done a 2-mile walk – then I looked down at my Fitbit – while exploring all the other casinos, walking the strip, heading round the Neon Boneyard and other fun stuff I’d done that day I’d actually walked 13 miles without noticing.

Most mornings we did 3000+ steps just getting out from the Vdara out through the Bellagio hotel and onto the strip!

Go the Heart Attack Grill: You may notice that healthy is in inverted commas up above – this is why. It’s a medical-themed restaurant that prides itself in selling the most calorific food in the world – one of their burgers contains a whopping 20,000 calories, and, if you don’t eat it you will get spanked by one of the waitresses dressed as nurses.

I knew there was no way I would finish one of their meals – and didn’t fancy being punished accordingly – and so we just sat at the bar with an IV drip of wine.

Yes, it actually comes in a bag on a stand.

Oh, you also have to wear hospital gowns. Don’t take it seriously, go in there in the spirit in which it’s intended and you’ll have a blast.

Sadly there were a heap of other things I wanted to try while I was here I just didn’t get time for – Indoor Sky Diving, the indoor trampoline park, the world-famous hangover remedy bus or yoga sessions in front of dolphins.

Have you do anything healthy in Vegas that I should check out next time I’m there? Or are there any more unusual fitnessy things you’ve tried on holiday? Let me know